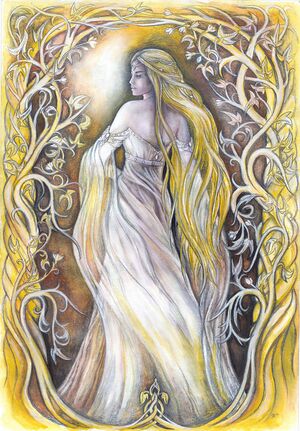 The massánië (S. besain) was the name given to an elven queen that kept and distributed lembas.[1]

In the making of lembas, only the Yavannildi knew the process and were allowed to handle the grain from the ear to the wafer. As the grain came from Yavanna, only the queen, or the highest among the elven-women of any people, great or small, could keep and distribute the lembas.

The only queens known to share lembas were Melian (to Beleg and Túrin) and Galadriel (to the Fellowship of the Ring).

Massánië is Quenya for "Lady, breadgiver", from massa ("bread") + anta- (gerund, "give"). The Sindarin besain means the same.[1]

According to the Oxford English Dictionary, "lady" comes from Old English hlæfdige, from words meaning "loaf" and "kneader".