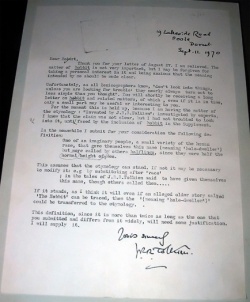 A letter from Tolkien to the OED, explaining the entry "Hobbit".

"Tolkienian, a. Of or pertaining to the philologist and author of fantasy literature John Ronald Reuel Tolkien (1892-1973) or his writings."
― Oxford English Dictionary[1]

The dictionary project started in 1878. Though it was originally not a part of the University of Oxford, the institute took over the project later. The sections covering A-H were published by 1900, but both the war and the death of Sir James Murray, the original editor, in 1915 meant that the section U-Z was not complete yet.[2] After Murray's death, three editors remained: Henry Bradley, William Craigie, and C.T. Onions. Most of their assistants had gone to war and not returned (either not to the Dictionary or not at all), so new assistants were necessary.[3]

According to Gilliver et al., Tolkien worked on the following words:[3]

"Some may well ask what a blunderbuss was. Indeed, this very question, it is said, was put to the Four Wise Clerks of Oxenford, and after thought they replied: 'A Blunderbuss is a short gun with a large bore firing many balls or slugs, and capable of doing execution within a limited range without exact aim. (Now superseded in civilized countries by other firearms.)' "
― Farmer Giles of Ham[4]

Later, in The Notion Club Papers, the N.E.D. appears:

"'Yes, doink has come on a lot lately,' said Lowdham. 'But it's not brand-new, of course. I think it's first recorded, in the Third Supplement to the N.E.D., in the fifties, in the form dŏing: seems to have started in the Air Force in the Six Year's War"
― Arundel Lowdham[5]