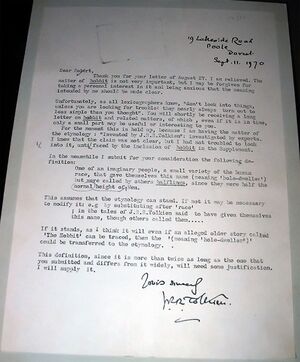 The Oxford English Dictionary staff, compiling an entry for hobbit in their second supplement, asked about the origin of the word and whether it was from an earlier story. Tolkien acknowledged a personal interest in it and wanted his meaning to be clear. He did warn them that looking into things was looking for trouble.

He was having the etymology "invented by J.R.R. Tolkien" investigated by experts. He knew his claim was not clear but he had not troubled about it until the Second Supplement inclusion came up. He then provided a definition, assuming that the etymology could stand:

One of an imaginary people, a small variety of the human race, that gave themselves the name (meaning "hole-dweller") but were called by others halflings, since they were half the height of normal men.[note 1]

If the etymology did not stand, they should substitute after "race":

in the tales of J.R.R. Tolkien said to have given themselves this name, though others called them…