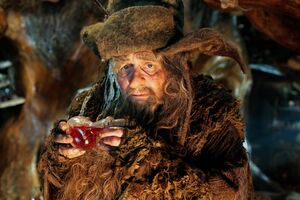 Radagast in The Hobbit: An Unexpected Journey

Tolkien's feelings on whether or not Radagast, and indeed the two "Blue Wizards", failed changed over time. The wizards that were sent to Middle-earth were tasked by the Valar to help the Free Peoples defeat Sauron. There is no question that, through his treachery and fall into evil, Saruman failed. There is also no question that Gandalf succeeded. But it was in emphasising this latter point that Tolkien denigrated the role of Radagast and the Blue Wizards.

In his efforts to produce an Index for The Return of the King in 1954, Tolkien wrote an essay on the Istari. Therein he explicitly stated that Radagast had failed:

Indeed, of all the Istari, one only remained faithful [Gandalf], and he was the last-comer. For Radagast, the fourth, became enamoured of the many beasts and birds that dwelt in Middle-earth, and forsook Elves and Men, and spent his days among wild creatures.
—J.R.R. Tolkien[1]

He even went as far as suggesting that only Gandalf returned to the Uttermost West:

Wilt thou learn the lore || that was long secret
of the Five that came || from a far country?
One only returned. || Others never again
—J.R.R. Tolkien[1]

Under these terms, then Radagast had failed. However, not only does Tolkien's criticism of Radagast seem harsh in light of what is revealed in The Lord of the Rings, Tolkien's attitude towards Radagast and the Blue Wizards seems to have changed following the publication of The Return of the King. In the Istari essay and in Letter 211 Tolkien wrote that he was unsure what happened to the Blue Wizards and speculated that they possibly failed. In a later writing he turned this upside down and noted that they 'must have had very great influence on the history of the Second Age and Third Age in weakening and disarraying the forces of East ... who would ... otherwise have ... outnumbered the West.'[2]

According to John D. Rateliff, Tolkien's feeling on Radagast's success or failure must have changed too. He speculates that Radagast had taken the area of and around Mirkwood under his protection (like the Blue Wizards had taken the east under their protection). He provides more solid evidence when he argues that Radagast and Gandalf were much alike:

Indeed both were quite different creatures from Saruman:

His [Sauron's] cynicism ... seemed fully justified in Saruman. Gandalf he did not understand. But certainly he [Sauron] had already become evil, and therefore stupid, enough to imagine that his [Gandalf's] different behaviour [from Saruman's] was due simply to weaker intelligence and lack of firm masterful purpose. He [Gandalf] was only [in Sauron's view] a rather cleverer Radagast - cleverer, because it is more profitable (more productive of power) to become absorbed in the study of people than of animals.
—J.R.R. Tolkien[note 1][3]

Rateliff thus concludes that Radagast was much like Gandalf; both were good wizards. But Radagast was weaker and his role overshadowed by Gandalf's achievements.[4]

Tolkien gave a brief account of a council of the Valar where they decided to send emissaries to Middle-earth to contest the will of Sauron. Therein it is told 'that each Istar were chosen by each Valar for his innate characteristics'.[1] This is significant because it suggests Yavanna chose Aiwendil (Radagast) for his love of wild creatures, and that perhaps he was sent to Middle-earth by Yavanna to serve this purpose.[1] If this was Radagast's appointed mission then it would be inappropriate to claim that he failed. However, it is difficult to gauge how far the fulfilment of this task facilitated the downfall of Sauron.

Perhaps the most explicit snapshot of Tolkien's feelings about Radagast can be found in this quotation:

He [Gandalf] differed from Radagast and Saruman in that he never turned aside from his appointed mission ('I was the Enemy of Sauron') and was unsparing of himself. Radagast was fond of beasts and birds, and found them easier to deal with; he did not become proud and domineering, but neglectful and easygoing, and he had very little to do with Elves or Men although obviously resistance to Sauron had to be sought chiefly in their cooperation.
—J.R.R. Tolkien[5]

Here it is stated that both Saruman and Radagast turned away from the ultimate task of defeating Sauron. But where Saruman was proud and power-hungry (characteristics which brought about his own ruin), Radagast was neglectful and sought companionship with birds and beasts over co-operation with the Free Peoples of Middle-earth. Thus Radagast's innate characteristics meant that he could play no more than a small part in the downfall of the Lord of the Rings.