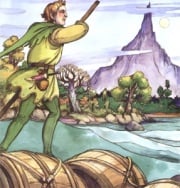 The raft-elves brought goods on the Forest River between the Woodland Realm and Esgaroth. The goods were stored in barrels which were tied together and then poled or rowed up the river. Sometimes they also used flat boats, on which the goods were loaded.[1]

The term "raft-elves" is mentioned only once,[1] so likely these elves pertained to Thranduil's Elves of Mirkwood.

The Raft-elves are a separate tribe of Nando and Sindar Elves, residing in the village of Celebannon upon the Forest River.[2]

The Raft-elves live in the elven-settlement known as "Loeglond", which continued to ferry goods from the Elvenking's Halls of Felegoth, to the new Lake-town throughout and after the events of the War of the Ring.