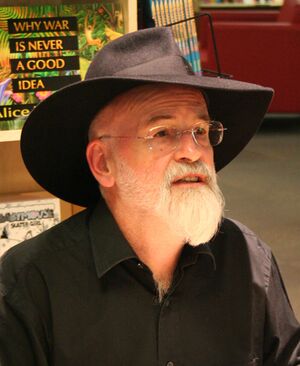 In an interview with The New York Times, Pratchett was asked “Who are your favorite fantasy novelists?” to which he replied:

In another interview Pratchett wass asked: "Why do you feel uncomfortable with being ahead of Tolkien?" and he replied:

I think Tolkien will be around in a hundred years time but I’m not certain that I will.
—[2]

“[W]hen I was young I wrote a letter to J.R.R. Tolkien, just as he was becoming extravagantly famous. I think the book that impressed me was Smith of Wootton Major. Mine must have been among hundreds or thousands of letters he received every week. I got a reply. It might have been dictated. For all I know, it might have been typed to a format. But it was signed. He must have had a sackful of letters from every commune and university in the world, written by people whose children are now grown-up and trying to make a normal life while being named Galadriel or Moonchild. It wasn’t as if I’d said a lot. There were no numbered questions. I just said that I’d enjoyed the book very much. And he said thank you. For a moment, it achieved the most basic and treasured of human communications: you are real, and therefore so am I.”[3]

He also talked about how influential Tolkien has been in modern fantasy in his essay 'Magic Kingdoms':

“J.R.R. Tolkien has become a sort of mountain, appearing in all subsequent fantasy in the way that Mt. Fuji appears so often in Japanese prints. Sometimes it’s big and up close. Sometimes it’s a shape on the horizon. Sometimes it’s not there at all, which means that the artist either has made a deliberate decision against the mountain, which is interesting in itself, or is in fact standing on Mt. Fuji."”[4]