The Dungeons of Moria (video game)

The Dungeons of Moria, also know as Moria, is an old rogue-like computer game, drawing inspiration from The Lord of the Rings and Dungeons and Dragons. The goal in the game is to reach the bottom of the maze of mines of Moria and kill the Balrog.[3]

Robert Alan Koeneke started working on The Dungeons of Moria in 1980 or 1981 at the University of Oklahoma after he became hooked on the game Rogue but could not run it on the VAX 11/780 computer running VMS to which he had access. Hence, he decided to write his own Rogue game. The first version - Moria Beta 1.0 - was written with VMS BASIC and resembled Rogue. In 1983 converted the game to VMS PASCAL, utilizing its' new feature, variable length strings, and improved the game's data structures and optimization. In summer 1983, Koeneke completed Moria 1.0 and spread it amongst students of the University of Oklahoma.[4] Jimmey Todd, a close friend of Koeneke, rewrote the character generator and added skills, history and several other functions. This became Moria 2.0.[4] 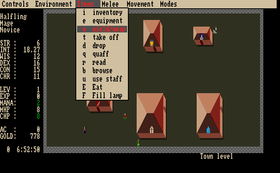 Gameplay of The Dungeons of Moria.

In 1983-1985, Koeneke used the advice of player to improve the game and fix bugs. Every time a player completed the game, he would raise raise the difficulty of the game, eventually claiming that the game was unbeatable. In light of a football match between the University of Oklahoma and the University of Texas, Koeneke sent an edited, unbeatable version of the game to University of Texas students. From around 1985 the source code was widely distributed under a licence that permitted sharing and modification but not commercial use. Koeneke's last release was Moria 4.7 in 1986 or 1987.[4] Koeneke stopped participation in the developed, when he left university and started working for American Airlines. At the time Moria 5.0 was still in progress. This update would be a complete rewrite and add several features, including bodies of water with water monsters, mysterious orbs and new weapons and treasures.[4] Development was continued by his programming assistants, Jimmy Wayne Todd and Gary D. McAdoom.[1] It is unknown if this version was ever finished, but according to Koeneke this is unlikely.[4]

The game was officialy maintained by David Joseph Grabiner. The last update was Moria 5.5.6, which was released in 1994, after which activity seems to have been ceased.[5][6][2] The game was shared over the whole world and several derivative versions were made. Koeneke received thousands letters from players about the game and their exploits.[4] In a forum at Google Groups he said:

from players telling about their exploits, and from administrators cursing the day I was born... I received mail from behind the iron curtain (while it was still standing) talking about the game on VAX's (which supposedly couldn't be there due to export laws). I used to have a map with pins for every letter I received, but I gave up on

Moria inspired a number of derivative versions. Jim E. Wilson created Umoria, a modified version in C for UNIX. At the University of Washington a modified Pascal version named Imoria was developed, which has been ported to C by Steve Kertes. Angband was derived from Umoria at the University of Warwick. Furthermore, it is known to have been an inspiration for Diablo.