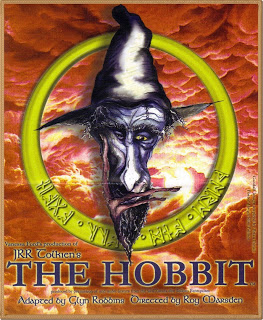 The Hobbit was a musical adaptation of J.R.R. Tolkien's The Hobbit written by Glyn Robbins. It was played for the first time between 28 November 2001 to 9 February 2002, at Queen's Theatre in London. The play was performed under license from Middle-earth Enterprises.

Enjoy the sights, sounds and excitement of the best selling fantasy novel ever written, in this fresh spectacular live theatre production with sparkling new magical effects.

Bilbo Baggins, a quiet and contented Hobbit, has his life turned upside down when he is chosen by Gandalf the Sorcerer to join Thorin Oakenshield, exiled king of the Dwarves, on his quest to reclaim their kingdom and treasure.

A frightening but magical journey – a journey from which they may never return.

The adventurers battle through the Misty Mountains, wind, rain, hail and thunderstorms, narrowly escaping Trolls, Goblins, Wolves and Giant Spiders. Finally Bilbo alone must face the guardian of the treasure, the most feared dragon in all Middle Earth – Smaug ..."

The stage adaptation by the late children's playwright Glyn Robbins has played to nearly half a million people during national tours and Christmas seasons in the West End.[source?]