The Dagor-nuin-Giliath (Battle-under-Stars) was the second battle of the Wars of Beleriand, it was given that name because the Moon had not risen yet. It was the first battle fought by the Noldor against the forces of Morgoth. The battle was preceded by the First Battle.

Morgoth had returned to Middle-earth after stealing the Silmarils and destroying the Two Trees of the Valar. He renewed his old fortress of Angband and attacked the Elves of Beleriand in what is known as the First Battle of Beleriand. He suffered heavy losses but managed to inflict heavy damage to the Sindar forcing them to retreat. The Falas were besieged by his host of Orcs.

Meanwhile the Noldor following Fëanor were pursuing Morgoth for the theft of the Silmarils. They stopped when they reached the Helcaraxë and Fëanor debated on what to do as the narrow strait was dangerous to cross and the Noldor were growing restless. Later Fëanor chose to bring those he deemed loyal to him and sailed accross the sea in secret with the boats he captured from the battle of the Haven leaving Fingolfin and his followers behind.

Fëanor and his followers returned to Middle-earth in Y.T. 1497,[4] landing in Lammoth. There they burnt the ships at a place known now as Losgar. The host went up the Firth of Drengist and passed through where it pierced the Ered Lómin into Hithlum and encamped on the northern shore of Lake Mithrim.[1]

The burning of the ships at Losgar were noticed by Fingolfin but also by the watchers of Morgoth. Morgoth sent a host of Orcs and werewolves[5][note 1] through the passes of the Ered Wethrin for a suprise attack hoping to destroy the Noldor before they could establish themselves. 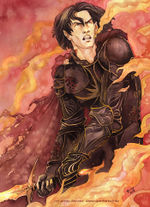 The Elves were assailed at their camp before its defences were completed. The Orcs of Morgoth far outnumbered them, however the Noldor were still empowered with the Light of Valinor and quickly defeated them. The Orcs retreated accross the Mountains of Shadow into Ard-galen with the Noldor in hot pursuit.[1]

The forces of Morgoth that had been besieging the Havens of the Falas since the First Battle of Beleriand marched north to aid the fleeing Orcs, but a force led by Celegorm ambushed them near Eithel Sirion and pushed them back into the Fen of Serech. The battle lasted ten days and all but a few Orcs perished, and Fëanor in his wrath pursued even this small group.[1]

The tables turned at the edge of Dor Daedeloth, as Balrogs poured forth from Thangorodrim. Fëanor fought mightily, hewing his foe even after receiving several wounds from Gothmog, Lord of Balrogs, until he was finally fatally wounded. Then the armies of his sons reached him, and the Orcs and Balrogs retreated.[1]

Fëanor was to be brought back to Mithrim but as they drew near the pass of Ered Wethrin, Fëanor bade them to halt and he saw from afar the peaks of Thangorodrim. He cursed Angband thrice, but with the eyes of death, he knew that his Elves, unaided, would never throw down the dark towers. At the moment of his death the passing of his fiery spirit reduced his body to ashes.[1]

Later Morgoth sent an embassy offering terms and feigning the surrender of a Silmaril. Maedhros, the eldest of the brothers also feigned to treat with Morgoth and appointed a place to meet. Both parties came in greater force than was agreed in the treaty, but unbeknownst to Maedhros, Morgoth sent an even greater force, and Maedhros' company was killed and the son of Fëanor captured. Maedhros was held hostage and Morgoth sent word to the Noldor to depart Beleriand and forsake their war. But the Sons of Fëanor were constrained by their oath and would not leave, so they withdrew to Hithlum and built a fortified camp. Maedhros was hung by the wrist of his right hand upon the face of a precipice of Thangorodrim.[1]

In the earlier writings the battle was first named Dagor-os-Giliath[7], but later changed to Dagor-nuin-Giliath, there was also another variant Dagor-nui-Ngiliath.[8] The battle was considered to be the First Battle of the Wars of Beleriand but this was later changed to include Morgoth's battle with the Sindar as part of the Wars so it was moved as the second battle.[9]