"Maglor was mighty among the singers of old, named only after Daeron of Doriath."
― Quenta Silmarillion, "Of the Voyage of Eärendil and the War of Wrath" 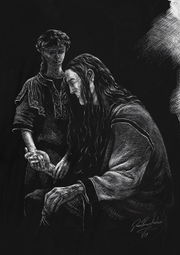 Maglor is not glossed in the mature Sindarin, but being the Sindarized version of the Quenya name Makalaurë,[11] it would mean "Forging Gold".[12] In a pure Sindarin rendition it would have been Magalor.[11]