Of Beren and Lúthien

Of Beren and Lúthien

Of Beren and Lúthien is the nineteenth chapter of the Quenta Silmarillion section within The Silmarillion.

At Tarn Aeluin by Ted Nasmith

Barahir and his band of outlaws were defending Dorthonion where Morgoth had pursued him during the Dagor Bragollach. The outlaws withdrew to Tarn Aeluin, where they were hidden from Morgoth. Among them was Gorlim son of Angrim who was the husband of Eilinel. When Gorlim had returned to his house after the war, he had found it empty, and Eilinel gone. During their time in exile, Gorlim often journeyed secretly to their old house, where Orcs sought him out and captured him. They brought him to Sauron, who promised Gorlim that he would see Eilinel again if he betrayed the location of Barahir's hideout. Gorlim complied, but when he had told all that Sauron wished to know, Sauron revealed to him that Eilinel was dead, and that to reunite them Sauron would kill the unhappy outlaw.

Also among the outlaws was Beren, son of Barahir. Barahir had sent Beren to spy out the Enemy's plans. Thus, Beren was far away when Sauron sent out an Orc-pack to kill his companions. In a dream, Beren saw crows with blood dripping from their beaks. In that same dream, Gorlim came to him as a wraith and told him of his treachery, and of Barahir's danger. Beren woke, and returned swiftly to the hideout, only to find that his dream was in part true: Barahir was slain and crows surrounded the area. Beren raised a mound above his father and swore upon it an oath of vengeance. He then set off in pursuit of the Orc-pack. When he came upon it, he found the captain of the Orcs boasting, and holding aloft the hand of Barahir, which he had cut off. Beren, springing from his hiding place behind a rock, slew the captain and took Barahir's hand, which was still wearing the Ring of Barahir.

For four years, Beren journeyed in and near Dorthonion and earned renown with his desperate deeds. After a while he journeyed to Doriath seeking refuge. He came to the Forest of Neldoreth and there he met Lúthien, whom he named Tinúviel, "nightingale". They fell in love, and often they met in secret in the woods. But Daeron, who also loved Lúthien, spied on them and reported their doings to Thingol. Thingol became angry, and ordered Beren to be brought to him in Menegroth. When they came before him, Beren spoke proudly, and there Thingol would have slain Beren, had he not sworn an oath to Lúthien that he would neither kill nor imprison Beren. Melian whispered to Thingol counsel of Beren's fate, which was wound with Thingol's own. Thingol eventually agreed to allow Beren to wed Lúthien if Beren would bring him a Silmaril. Beren agreed and set out on the quest for a Silmaril.

Beren went first to Nargothrond, whose King, Finrod Felagund had sworn an oath of friendship to the house of Barahir. Beren told the King of his plight and of his quest, and Felagund agreed to go forth to aid him. Felagund spoke before his people, seeking their help, but Celegorm and Curufin spoke out harshly against Beren. Ten elves only came to Felagund, and stood by him. They convinced him to give the Crown of Nargothrond to Orodreth, his nephew, while they were gone.

Felagund, Beren, and the others came upon a company of Orcs on the road to Angband. These they slew, and Felagund changed the companions' appearances into those of Orcs. The twelve went forth to Sauron's Isle. But Sauron, seeing that they did not stay to report their deeds as was commanded of all passing Orcs, ordered that they be brought to him. There they fought a contest of songs of power, for Sauron sang a song of revealing, but Felagund responded with a song of concealment. Back and forth they struggled, but in the end, Sauron had the victory, and they were stripped of their disguises. He bade them tell him their names and purposes, but they would not. Therefore he caused them to be thrown into his pits to be killed by wolves, one by one, unless one would reveal who they were. Still, none betrayed their secret. 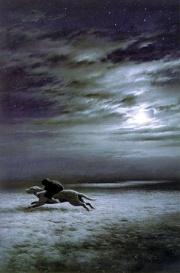 At that time, Lúthien went to Melian for counsel and learned that Beren was imprisoned. She decided that, as no other would now aid Beren, she herself would go to his aid. She went to Daeron for help, but once again he betrayed her purposes to Thingol, and she was imprisoned in a house built high in Hírilorn's three trunks in the Forest of Neldoreth. There she used her enchantments to cause her hair to grow very long, and she wove of it a dark cloak and a rope. These she used to escape Doriath, and she fled towards the Isle in search of Beren. As she left the forest, she was discovered by Huan the Hound, who was hunting with Curufin, and Celegorm his master. He brought Lúthien before them. Celegorm, upon seeing her beauty, became enamored of her, but he told her that she would find help if she returned with him to Nargothrond. She agreed, but when they reached Nargothrond, Celegorm imprisoned her. But Huan, who had grown to love Lúthien, came to her with her cloak, and spoke for the first time, telling her of a way out. When they had escaped, he permitted her to ride him, and they traveled towards Sauron's Isle to save Beren.

Even as Lúthien rode there, Beren and Finrod were attacked by Sauron's wolves. The wolves had slain all of their companions, and one was coming at last for Beren. But Finrod, with the last of his power, burst his bonds and fought the werewolf, defending Beren. He killed the wolf, but was himself slain, and Beren mourned by his side as Lúthien and Huan arrived at the bridge to Sauron's isle. Sauron sent wolves one by one after them, with the intention of capturing Lúthien, but Huan killed each one swiftly. At last Sauron, taking the form of the great wolf himself, came to fight Huan. There was a terrible fight between the two, but even Sauron could not defeat Huan, and he was forced to surrender his tower to Lúthien. He fled to Taur-nu-Fuin in the form of a vampire. Lúthien freed the captives and sought out Beren, who mourned still by Finrod. They buried Finrod and went free together.

As they reached the borders of Doriath, Celegorm and Curufin rode upon them. Curufin picked up Lúthien as Celegorm made to trample Beren. But Beren leaped at Curufin, catching him by the throat and knocking him off his horse. As Beren throttled Curufin, Celegorm turned his horse and tried again to kill Beren, but Huan betrayed his master and stood between them, and Celegorm's horse would not go near. Lúthien would not allow Beren to kill Curufin, so he released him, taking his knife, horse, and other accessories. Curufin mounted Celegorm's horse, but as they rode away, Curufin took Celegorm's bow and shot twice at Lúthien. Huan caught one arrow in his teeth, and Beren jumped before the second, and it struck him in the chest. Huan pursued the brothers, but later returned with an herb of the forest, which Lúthien used to staunch Beren's wound. When Beren was healed, they returned to Doriath.

Beren knew Lúthien would be safe there, and one night he departed in secret to continue his quest. As he came to the edge of Taur-nu-Fuin, he sang a song of farewell to Lúthien and to the lights of heaven. But Huan, carrying Lúthien, had followed his trail, and hearing his song Lúthien sang in reply. She had taken the guise of Thuringwethil, a messenger of Morgoth, and Huan had taken the guise of Draugluin, a wolf he had slain in the Pits of Sauron. When they approached Beren they cast off their disguises, and Huan spoke for the second time, counselling him of Lúthien's fate. Then Lúthien put on her disguise again, and Beren was granted the guise of Draugluin.

When they reached the Gates of Angband, the guard-wolf Carcharoth became suspicious, for he had heard that Draugluin was dead. But Lúthien used her power to make him fall into a deep sleep, and they passed him by.

Then Beren and Lúthien came before Morgoth in his nethermost hall. By Morgoth's will Lúthien was stripped of her disguise, but Beren still in wolf-form crept beneath his throne. Lúthien offered to sing for Morgoth, and being entranced by her he allowed this. Suddenly, as she was singing, she vanished from his sight and sang a lovely song that cast a sleeping charm on him and all those near. Morgoth fell from his throne and lay upon the ground. Lúthien woke Beren, and he left behind his disguise and cut a Silmaril from Morgoth's crown. Purposing to take a second, he reached with his knife to take it, but the knife broke and he was unable.

Then the hosts of Morgoth stirred. Beren and Lúthien fled, but they were stopped by Carcharoth at the Gate. Lúthien was spent of her strength and could do nothing to stop him. But Beren thrust the Silmaril in Carcharoth's eyes and cursed him. Carcharoth, undaunted by the holy light, bit off Beren's hand and swallowed it whole, along with the Silmaril. As Beren fainted in front of him, Carcharoth was scorched by the Silmaril inside of him, and he ran away howling.

Lúthien used her remaining power in an attempt to heal Beren, hoping to save him, and Thorondor King of the Eagles swooped down and lifted the two high in the air. Passing over Tumladen Lúthien saw the Hidden City, but she grieved, for she thought Beren would die. Thorondor left them on the borders of Doriath, where Huan returned to them and aided Lúthien in the healing of Beren. When Beren was recovered he and Lúthien returned to Thingol. Thingol asked for the Silmaril, but Beren said that although his hand held a Silmaril, his hand had been bitten off, and the Silmaril was now in the belly of Carcharoth, who was attacking northern Doriath in his rage. Then Beren told Thingol his story, and they began the hunting of Carcharoth.

Thingol, Beren, and Huan went to Esgalduin on the hunt with Beleg and Mablung. Suddenly they were aware that Huan was no longer with them. He had gone ahead to search, but Carcharoth avoided him and leaped at Thingol. Beren stood in front of Thingol, defending him with a spear, but Carcharoth felled him and bit his breast. Huan sprang out and fought with and killed Carcharoth. But he himself was mortally wounded, and speaking for the third and last time, Huan bade Beren farewell. Mablung took the Silmaril from Carcharoth's belly and gave it to the wounded Beren, rousing him. Thus, Beren achieved the quest for the Silmaril, handing it to Thingol and winning Lúthien. They carried Beren towards Menegroth, where Lúthien met them, but as Beren looked upon her his spirit left him. Beren strayed to the Halls of Mandos in that time, and Lúthien came there also, stricken with grief. She sang a song of great sorrow before Mandos, and he was moved to pity, such as has never happened since and had never happened before. Beren and Lúthien were allowed to return to Middle-earth for a time as mortals, and this they chose.

Retrieved from "http://tolkiengateway.net/wiki/Of_Beren_and_L%C3%BAthien"
Categories: Articles to be rewritten | The Silmarillion chapters