Húrin Thalion ("the Steadfast"), was the eldest son of Galdor and Hareth, older brother of Huor, father of Túrin Turambar and Nienor, and Lord of Dor-lómin. Húrin was captured by Morgoth at the Nirnaeth Arnoediad and he and his kin were cursed by the Dark Lord. The curse led to some of the greatest successes and tragedies of the First Age. He was the greatest warrior of Men in the First Age.

The grandson of Hador Lórindol, founder of the House of Hador, was raised with his younger brother Huor in the forest of Brethil. In F.A. 458, the brothers joined a war party but were separated and trapped in the Vale of Sirion. The Vala Ulmo caused a mist to rise and the two escaped into Dimbar. From there, Eagles flew them to the gates of the hidden city Gondolin. King Turgon welcomed the brothers, remembering a prophecy that the children of Hador would aid Gondolin during its darkest hour. They remained with Turgon for a time and, after swearing an oath of secrecy, were returned to Dor-lómin sometime before 462.

In F.A. 462 orcs invaded Hithlum and Galdor was slain defending the wells of Eithel Sirion. Húrin drove off the Orcs and returned to rule as the third Lord of Dor-lómin and the seventh Chieftain of the House of Hador (House of Marach). Two years later he married Morwen Eledhwen of the House of Bëor. Their son Túrin was born shortly thereafter, followed by a daughter, Urwen. Urwen, better known as Lalaith ("Laughter"), died of the plague when she was three. 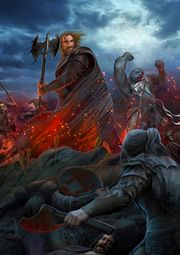 In 472, the alliance known as Union of Maedhros led Elves, Dwarves, and Men to assault Morgoth in the Nirnaeth Arnoediad ("The Battle of Unnumbered Tears"). A debacle, High King Fingon and his host were separated from the other half of the army and Fingon himself was slain by a Balrog. With their liege lord slain and facing a rout, Húrin and Huor convinced King Turgon to withdraw and keep the secret of Gondolin. To defend his escape, the soldiers of Dor-lómin formed a line across the Fen of Serech and were slaughtered by the forces of Morgoth. Huor was slain by an arrow through the eye, but Húrin fought on until he was buried under the weight of bodies of orcs and trolls.

Captured, Húrin was brought before Morgoth and tortured for the secret of Gondolin's location. When he would not break, Morgoth cursed him and all his kin. The Dark Lord then chained Húrin to a chair high on the slopes of Thangorodrim where, through Morgoth's sorcery, he could watch the tragedies that would befall his family.

[edit] The Curse of Morgoth 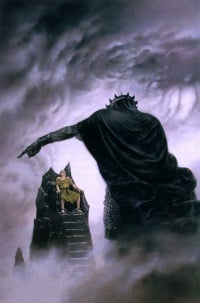 Ted Nasmith - Morgoth Punishes Húrin
For 28 years, Húrin watched the curse destroy his children. His daughter, Nienor, was born shortly after his capture and was trapped in the doom of Túrin. Their actions also led to the destruction of Nargothrond, one of the last kingdoms of the Noldor. Now only Gondolin remained.

In 499, after the death of his children, Morgoth freed Húrin. The broken man first returned to Dor-lómin, which was now ruled by Easterlings loyal to Morgoth. Finding none of his kin, he traveled with outlaws to the mountains of Echoriath, searching for the entrance to Gondolin. At first Turgon refused him, but later recanted and sent Eagles to bring him to Gondolin. Húrin had already left for the Forest of Brethil, but Morgoth's curse had already ensnared Gondolin, for the Dark Lord's spies now knew the location of the Hidden Kingdom.

In the Forest of Brethil he found the graves of his children. His wife, Morwen, was there and she died shortly after. After burying his wife, Húrin went to the settlement of Ephel Brandir, the home of the People of Haleth, with whom Túrin lived the last years of his life. Angry and grieving, he turned the People of Haleth against one another and ruined Ephel Brandir.

Húrin continued on to the ruins of Nargothrond, where he found the Petty-dwarf Mîm. The petty-dwarf had betrayed Túrin years ago and in revenge Húrin slaughtered him. Mîm had claimed the treasure of Nargothrond, but Húrin recovered the Nauglamír and took it to Doriath, the last great elvish kingdom.

Húrin was allowed to enter Menegroth, the capital of Doriath, where in anger he threw the Nauglamír before King Thingol and 'thanked' him for aiding his son. Thingol's wife, Melian, finally pierced through Húrin's madness and grief, and shamed by his actions, he picked up the Nauglamír to give to the king as a gift and memorial, then he left Menegroth a broken man. Since Húrin left the Nauglamír, the curse of Morgoth, the Oath of Fëanor, and the Doom of Mandos would later contribute to the destruction of Doriath as well. 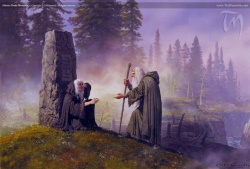 Around F.A. 500, Húrin reached the Great Sea and in despair drowned himself. His life, and the lives of his children would become the Narn i Chîn Húrin.

Húrin is Sindarin for "Hardened".

In the Elder Days, the original form of the name was Chúrind (hard initial ch and audible d on the end) and presumably Húrin Thalion was called like that during his lifetime.

Húrin is the later form as it evolved until the Third Age when it was adopted by other individuals who took it as a name; and that is how this ancient name was referred in the Quenta Silmarillion.

The Silmarillion states that Húrin died at the age of 65. In The Grey Annals this was amended to 66 - in accordance with the genealogies in War of the Jewels - but Christopher Tolkien did not adopt the change into the published text.