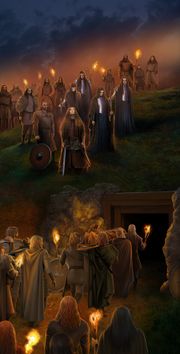 The Haladin belonged to a different branch than the other Edain of the west, and differed in a number of ways. They spoke an unrelated dialect of Mannish,[6] and although some of them learned Sindarin to communicate with the Eldar and the other Edain, theywere not fluent in it.[5]

In the notes to the Wanderings of Húrin in History of Middle-earth XI, Christopher Tolkien points out an interesting usage of the term 'Haladin'. It would seem that Tolkien at some point intended 'Haladin' to refer only to the noble line of the House of Haleth and not the House of Haleth as a whole.

Whether this definition of 'Haladin' would have survived into the final intent is questionable. This article takes the more widely used definition of referring to the entire People of Haleth.

[edit] Family tree of the House of Haleth and descendants