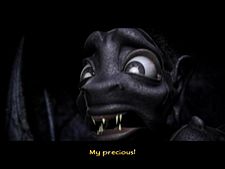 "'It has been called that before,' he said, 'but not by you.'"
― Gandalf to Bilbo, A Long-expected Party

"Precious", alternatively "the Precious", "my Precious" or "his Precious", was a name given to the One Ring by various Ring-bearers. Its use indicated the morbid covetousness induced in holders of the Ring by the Ring itself.

The very first Ring-bearer (besides Sauron) was the first to apply the term "precious" to the One Ring. In T.A. 2,[1] Isildur, who had taken the Ring from Sauron, wrote a scroll in which he described what he claimed as an heirloom for the North Kingdom. At the end ofthe document he wrote:

But for my part I will risk no hurt to this thing: of all the works of Sauron the only fair. It is precious to me, though I buy it with great pain.[2]

Centuries later, in 2463, Gollum took possession of the Ring after murdering Déagol. In 2470, Gollum hid in the Misty Mountains, taking the Ring with him into darkness.[1] When he began calling the Ring his "precious" is unknown, but by 2941 when he met Bilbo Baggins he was referring to "my precious" constantly.[3] It is difficult to distinguish whether Gollum was referring to the Ring or to himself when he used this term, which seems to indicate how much the Ring dominated his mind.

On 22 September 3001 Bilbo held his Farewell Party.[1] After vanishing after his speech he returned to Bag End to make his final preparations to depart from the Shire. When Gandalf urged the old hobbit to leave the Ring for Frodo, Bilbo became angry. He announced:

Eventually Gandalf was able to persuade Bilbo to relinquish the Ring, but Bilbo's behavior and his use of the word "precious" alarmed the wizard and spurred him to investigate the history of Bilbo's magic ring, leading him to Isildur's scroll.[2]

In the Cracks of Doom on 15 March 3019[5] Frodo claimed the Ring for himself and was immediately set upon by Gollum. Gollum won the fight and danced about with the Ring, shouting, "Precious, precious, precious! " He then slipped and fell into the chasm and the last word he wailed was "precious".[6]