Thráin I (Third Age 1934 – 2190, died aged 256) was the King of Durin's Folk for 209 years, succeeding his father, Náin I, when he was killed by the Balrog in T.A. 1981. Thráin founded the Kingdom under the Mountain at Erebor, and was a descendant of Durin the Deathless via his grandfather Durin VI.[1]

Thráin's grandfather, Durin VI, was King of Khazad-dûm when the Balrog of Morgoth appeared in Moria; this Balrog has forever been known as Durin's Bane as Durin was killed by it in T.A. 1980. Durin's son - and Thráin's father - Náin I was then King until he was himself killed in 1981 and the Dwarves left Moria.[1][2]

Thráin - at the tender age of 47 - became King of Durin's Folk. He led his wandering people until T.A. 1999 when he founded the Kingdom under the Mountain in Erebor,[2] while other portions went instead to the Grey Mountains. In Erebor the Dwarves began building a mighty kingdom, discovering the prized possession of King Thráin: the Arkenstone, the Heart of the Mountain. [1]

Thráin died in T.A. 2190 at the age of 256 and was succeeded by his son Thorin I. With a rule of 209 years, Thráin I was the longest-ruling of all the known Kings of Durin's Folk with, perhaps, the only exception being Durin the Deathless.

Þráinn is a dwarf from the Dvergatal. It means "Stubborn".[3]

It is not clear whether Thráin I existed in Tolkien's mind while he was writing The Hobbit or whether he was invented later, when writing the back-story of Lord of the Rings. The phrase on Thrór's Map "Here of old was Thrain - King under the Mountain"[4] causes some fans to claim that Tolkien wrote it for Thráin I, since Thráin II was never a King under the Mountain.

Christopher Tolkien, John Rateliff and Douglas Anderson say that Tolkien accidentally reversed the family tree Thrór --> Thráin --> Thorin to Thráin --> Thrór --> Thorin and then reverted it before final publication of the book. Rateliff argues in his book that the original tree was favored but that it is impossible to say which was intended to be the correct genealogy. According to Rateliff, the first edition uses the name "Thráin" in two distinct contexts that support either point of view and that Tolkien only added a third element to the story (the forenote) in 1947 when he sent suggested changes to the publisher. 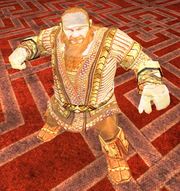 Thráin I in The Lord of the Rings Online

Thráin I appears in a flashback narrating the history of Fram and Scatha. It was he who received the necklace of Scatha's teeth after laying claim to the dragon's treasure, becoming greatly enraged at Fram's affront.