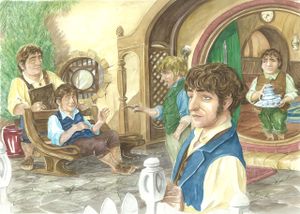 Frodo learns about the Conspirators in Crickhollow.

Consisting of Samwise Gamgee, Meriadoc Brandybuck, Peregrin Took, and Fatty Bolger, the self-described "Conspirators" were friends of Frodo Baggins who discovered that he was making plans to leave the Shire in order to escape some danger related to the Ring and conspired to assist him without his knowledge - this often meant spying and eavesdropping on Frodo's daily activities and conversations, until finally revealing themselves to Frodo just before he set out to leave, much to his surprise.

All begun around T.A. 3000 when a young Merry witnessed Bilbo Baggins becoming invisible to evade a meeting with the Sackville-Bagginses, noticing him holding a golden trinket. This made him curious and even peeked at Bilbo's Diary. Merry kept this knowledge private but was always suspicious and thought that after Bilbo' disappearance, Frodo would soon follow. He shared this secret information with his friends. Especially after April T.A. 3018 they noticed how Frodo was saying "farewell" to his favorite places, selling Bag End to the Sackville-Bagginses, and secretive talks with Gandalf. All along, Sam Gamgee was their "chief investigator" who heard Gandalf's instructions to Frodo for his departure[1], and warned his friends.

At Crickhollow Frodo was ready to reveal them that he didn't buy the house to stay but that he is heading for Bree. The Conspirators then told him that they knew that he was leaving all along, and that they are going with him, as Fredegar had prepared everything, provisions and ponies, for their departure.

They also told him that they know the existence of the Ring and that his flight was related to it. Fredegar (who had never left the Shire) was to stay behind to deal with any "inquisitive folk" and to keep up the pretense that Frodo was still living there by wearing Frodo's clothes and keeping about the place.[2]

Without their preparations, Frodo would likely have been captured by the Black Riders before he even escaped the Shire.