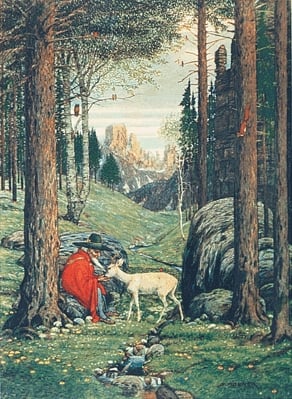 Der Berggeist ("The Mountain-spirit") is the title of the painting by Josef Madlener which was the inspiration for Gandalf. Humphrey Carpenter describes how J.R.R. Tolkien stumbled upon the postcard during a 1911 (see below), holiday in Switzerland.

"Before setting off on the return journey to England, Tolkien bought some picture postcards. Among them was a reproduction of a painting by a German artist, J. Madelener [sic]. It is called Der Berggeist, the mountain spirit, and it shows an old man sitting on a rock under a pine tree. He has a white beard and wears a wide-brimmed round hat and a long cloak. He is talking to a white fawn that is nuzzling his upturned hands, and he has a humorous but compassionate expression; there is a glimpse of rocky mountains in the distance. Tolkien preserved this postcard carefully, and long afterwards he wrote on the paper cover in which he kept it: 'Origin of Gandalf'."
—J.R.R. Tolkien: A Biography

While Carpenter stated Tolkien received the postcard in 1911, the artist's daughter was interviewed and stated the painting was most likely created in the mid to late 1920s. Carpenter notes that his statement was based on dated notes which accompanied the postcard, therefore it is generally assumed the postcard was acquired sometime around the mid 1920s.