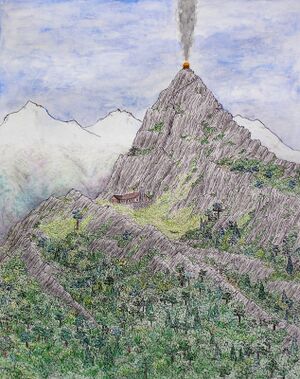 Eilenach was the second of the seven beacon-hills of Gondor, after Amon Dîn in the east, and it was the highest point of the Drúadan Forest. It had a sharp summit, incapable of sustaining a large fire. Its main purpose was to relay the fire of Amon Dîn to Nardol.[1][2][3]

On the night of 7 March T.A. 3019 Gandalf and Pippin, riding east on Shadowfax, saw the beacons being lit to call for aid from Rohan.[4]

On the origin of the name, Tolkien wrote Eilenach is "probably an alien name, not Sindarin, not Númenórean, or Common speech."[2][3] Perhaps it was pre-Númenórean.