El hobito was the first translation into Spanish of J.R.R. Tolkien's The Hobbit. It was published in 1964 in Argentina.[3]

On 3 July 1962, Alina Dadlez sent Tolkien a copy of letter from the Argentinian publisher Compañia General Fabril Editora, concerning a Spanish translation of The Hobbit. Tolkien replied on 20 July to Dadlez, sending her comments about how to translate specific words — suggesting the form hobitos for hobbits. Dadlez forwarded Tolkien's comments to the publisher in Argentina, and wrote to Tolkien again on 17 September: the publishers point out that since h is mute in Spanish, perhaps the form jobitos could be used. Tolkien replied on 19 September, saying that he still prefers hobitos: "I am sure many hobbits drop their hs like most rural folk in England".[4]

El hobito was apparently not very successful since only one edition was published. A second Spanish translation did not appear until 1982 (El Hobbit, published by Minotauro).[5] 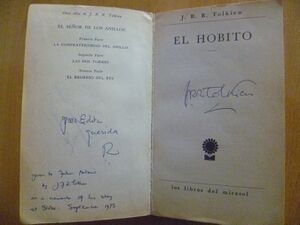 Tolkien received a few copies of El hobito from the publisher in Argentina, and apparently gave one to his wife Edith. A copy is known to have been signed by Tolkien on the title page, including a dedication in Spanish: "para Edita querida R" ("to [my] dear Edith[,] R[onald]"). After Tolkien's death, his eldest son Father John Tolkien gave the book to Father Antonio Quevedo in September 1973.[5]

[Translation: "The pages of this book contain the magic and the peculiar flavour of the ancient Norse sagas. Related to the works of Swift, Bunyan, and Lewis Carroll ... El hobito shows the full creativity of J.R.R. Tolkien."]