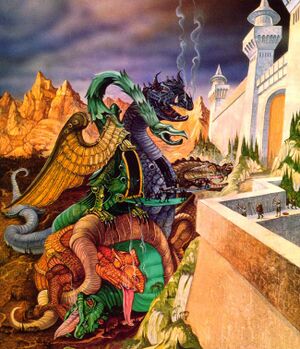 Fall of Gondolin by Roger Garland

The Iron Dragons were creatures of iron and bronze forged by the smiths of Melko[1] within the pits of Angband. They were only ever used against the peoples of Gondolin during its Fall.

It was Meglin who first conceived of the creation of monsters of fire and iron, and he brought this idea to Melko during his betrayal.[2]:169 When they came against Gondolin, they piled against the northern gate where the Orcs within would swarm into the breach.[2]:176

Based on their descriptions, it can be said that the Iron Dragons were inanimate in nature.[3] They were made by the most cunning of Melko's smiths and sorcerers. Their iron was expertly linked, so that they could coil and crawl like slow rivers over difficult terrain. Within these devices were Orcs armed with scimitars and spears, ready to emerge at need. It is said that after their appearance at Gondolin, such devices would not be seen again until the Great End.[2]:170

While many of Tolkien's works echo the conflicts of World War I, The Fall of Gondolin is particularly striking in the descriptions of the 'monsters' Melko has built in his preparation for the battle. According to John Garth, the narrative of the battle "appears to echo Tolkien's creative development and slow acceptance of duty in the first year of the war" whereas the latter part echoes his personal experience of battle. The iron dragons which are capable of crossing difficult terrain and which contain within them companies of orcs, could resemble tanks that made their debut in the Battle of the Somme.[4] In the commentary to the text, Christopher Tolkien seems to support this view saying that "the language employed suggests that some at least of the 'Monsters' were inanimate 'devices'," although he also points out they are also referred as 'beasts'.[3]