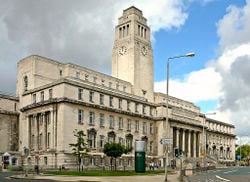 The University of Leeds is a centre for learning in the city of Leeds in Yorkshire, England. J.R.R. Tolkien taught there between 1920 and 1925; first as Reader but later a full Professor.

The University was Tolkien's second post-war employer. After the New English Dictionary and a year of tutoring students in Oxford, Tolkien decided to apply for a post at the University of Leeds. Tolkien had an interview with George S. Gordon, the University's Professor of English, in June 1920.[1] It was a fruitful job interview: Tolkien was appointed a Reader in English Language in October of the same year, with a free commission to develop the linguistic side of a large and growing School of English Studies.[2]

The start was rough: though Gordon found Tolkien a room in Leeds,[3] Edith and young John still lived in Oxford. In weekends, Tolkien would go to his family - now expanded with the birth of Michael. Not until 1921 did Tolkien get full housing for his family, first at 5 Holly Bank[4] and then at 11 St. Mark's Terrace.[5] They later moved to 2 Darnley Road.[6]

Under Gordon, Tolkien began focusing on philology, and taught various courses, such as "History of English", "Middle English texts", "Old and Middle English philology", "introductory Germanic philology", the second-year course "Old Icelandic" and "Medieval Welsh".[2] He might even have continued to fret on some of his hardest assignments of his time at the OED; several notes of his time show his added thoughts on "walrus" and "walnut" in Leeds notebooks.[7] The post of Reader was changed into a Professorship,[3] and in 1922, Tolkien was joined by E.V. Gordon.[5] Together, they started work on Sir Gawain and the Green Knight, and Tolkien continued to work on his A Middle English Vocabulary.[8] A year later, they would be joined by Lascelles Abercrombie[3] and Wilfred Rowland Childe.[9]

Tolkien left Leeds somewhat abruptly in 1925 when he was elected to the Rawlinson and Bosworth Professorship of Anglo-Saxon at Oxford, so that he actually occupied both posts simultaneously for the duration of 1926.[3] Reflecting on his time at Leeds in a later letter, Tolkien refuted the idea that he did not enjoy his time there:

I was devoted to the University of Leeds, which was very good to me, and to the students, whom I left with regret. The present students are among my most attentive readers...[10]

Tolkien contributed several poems to The Gryphon, Yorkshire Poetry, A Northern Venture and Leeds University Verse. He also finished stories that would later become The Book of Lost Tales Part One,[5] and started five poetic works as part of his mythology, but only the Lay of Leithian and the Lay of the Children of Húrin were more than just beginnings, the other three were abandoned.[11]