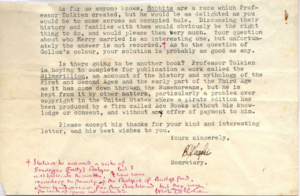 "On one of his copies of the First Edition he added to the genealogy of the Tooks (Fredegar's mother being Rosamunda Took) 'Estella' as the sister of Fredegar and her birth-date 1385; and to the Brandybuck genealogy he added to Meriadoc's '= Estella Bolger 1385', noting beside this that he had told a correspondent in 1965 that 'I believe he married a sister of Fredegar Bolger of the Bolgers of Budgeford'. These corrections, for a reason unknown to me, were not incorporated in the Allen and Unwin Second Edition, but they did occur in a later impression of the Ballantine edition of 1966, and hence Estella Bolger and her marriage to Merry Brandybuck are entered in The Complete Guide to Middle-earth by Robert Foster.

These additions to the family trees were made at the instance of Douglas A. Anderson in the Houghton Mifflin edition of 1987, to which he contributed a note on the history of the text. Estella Bolger and her marriage to Meriadoc have finally entered the British 'tradition' in the re-set edition published by HarperCollins in 1994 (see Douglas Anderson's 'Note on the text' in this edition, p. xii)."[3]

I believe he married a sister of
Fredegar (Fatty) Bolger, but I
will look into the matter. I have some
records of the family of the Bolgers of Budgeford,
whose lands were not far from Buckland, but they were
for lack of space not included. J. R. R. Tolkien