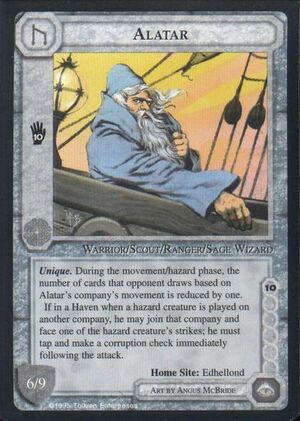 METW: Alatar is a game card from the set Middle-earth: The Wizards, for MECCG.

Unique. During the movement/hazard phase, the number of cards that opponent draws based on Alatar's company's movement is reduced by one. If in a haven when a hazard creature is played on another company, he may join that company and face one of the hazard creature's strikes; he must tap and make a corruption check immediately following the attack.

" he must make a corruption check immediately following the attack, and, if untapped, he must tap."[1]