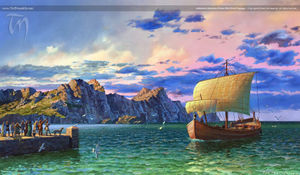 Aldarion Returns From His First Voyage by Ted Nasmith

Númerrámar was the first ship with which Aldarion sailed from Númenor to Middle-earth, between S.A. 725 and 727.[1] Its first owner was Vëantur, Captain of the King's Ships under Tar-Elendil and grandfather of Aldarion. During his journey Aldarion explored the regions Lindon and Eriador. The ship is said to have had golden sails .

As they had returned from the journey Vëantur donated Númerrámar to Aldarion, who within three years from the first journey sailed again to Lindon and was three years abroad.

Soon after that Aldarion made still another voyage, this time lasting four years, and evidently with Númerrámar even if it is not clearly stated, and explored the coasts of Middle-earth southwards all the way to the Bay of Belfalas.[2]

The fourth journey of Aldarion with Númerrámar occurred after a somewhat longer pause, but the records of its durance and bearings are not told. After that he built himself a new ship called Eämbar and nothing more is told about the ventures of Númerrámar, which, quite possibly, still served in the Royal Fleet that Aldarion now begun to enlarge in all possible ways.