The Petty-dwarves were a diminutive race of Dwarves.

Petty-dwarves differed from normal Dwarves in various ways: they were smaller and far more unsociable. It is said that they were the descendants of Dwarves who had left their communities as fugitives for some evil deeds, or been driven out, being deformed, undersized, slothful or rebellious.[1]

The Petty-dwarves were Dwarves of [presumably] several clans, which descended from Dwarves exiled for evil deeds from the mansions of their kind.[2] They were the first to cross the Ered Luin in the First Age, and established strongholds in Beleriand before the Elves arrived, at Nulukkizdîn and Sharbhund (also known as Bar-en-Nibin-noeg, the "House of the Petty Dwarves"). In Beleriand they diminished in physical stature and in smith-craft.[3] 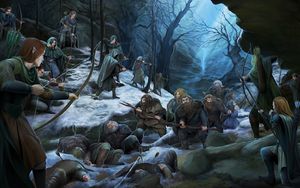 The Sindar, not acquainted with Dwarves yet, thought the Petty-dwarves were animals, and hunted them. Not until the Dwarves of Belegost and Nogrod established contact with the Sindar did they realize what the "animals" were and named them Noegyth Nibin; Petty-dwarves.

When Finrod decided to build his realm in their old dwellings, he first received their help. Pretending friendship with him, they helped him in the building of Nargothrond in exchange of a generous reward. But their chieftain Mîm tried to kill Finrod in his sleep and they were expelled.[2]

Thereafter they were mostly left alone, but they had already dwindled and hated all Elves with a passion; especially the Noldor whom they saw as usurpers who took their lands (Nargothrond was built in Nulukkizdîn).[3] In the time of the Wars of Beleriand the Petty-dwarves had nearly died out. The last remnant of their people were Mîm and his two sons Ibun and Khîm, who lived at Amon Rûdh.[3]

A Quenya name for a Petty was nuxo,[4] but collectively they were named Pitya-naukor or Pikinaukor.[1]