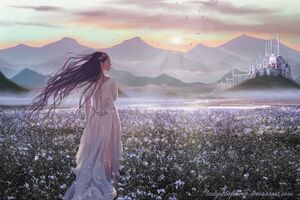 Nost-na-Lothion, or the Birth of Flowers, was a festival held in Gondolin according to the early version of the legendarium in The Book of Lost Tales.

It was celebrated during the early spring, with a "revelry of children". It was apparently held to celebrate the passing of winter, when the ice of the Encircling Mountains melted and Tumladin took the water and burst into flowers.[1]