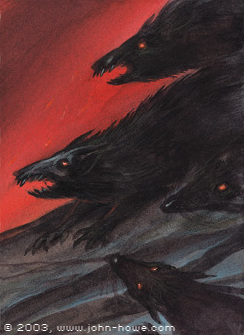 Rats were creatures often found in filthy and unfriendly places of Middle-earth.[1][2] A specific breed of rats seems to have been the "brown water-rat", mentioned in Hobbit poetry.[3]

In Quenya, the word for "rat" is nyarro, and the Noldorin cognate of the same meaning is nâr.[8][9]

Rats can infect people with the plague through their fleas.[10]

"Morgul-rats" is a Hazard Creature, able to inflict 12 strikes. The breed is described as carrying "the stink of black sorcery in their bite". "Rats!" is a Hazard Event, forcing a player to discard a minor item of one of the characters, which also become wounded.

"Morgul Rats" is a card (with artwork by John Howe) supplied with the Friends & Foes Expansion (2002) for the Lord of the Rings boardgame.[11]

As part of the Minas Tirith set, one hut was called the "Ratcatcher's hut", after a doodle by Alan Lee was interpreted as a rat. It was outfitted with several taxidermied rats, but was not featured prominently in the movie.[12]

Rats are always aggressive. Breeds include Field-rats (found in the Barrow-downs), Harbour-rats (found around Falathlorn in Ered Luin), and Plague-rats.[13][14]