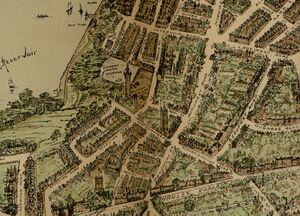 Birmingham is a city located in the West Midlands county in England. It was where J.R.R. Tolkien called home through most of his childhood from 1895-1911. Tolkien's parents Arthur and Mabel came from this city.[1] Tolkien's experience of growing up and living in Birmingham had a huge impression on him and his life's work.[2]

Tolkien was born in the Orange Free State in 1892. However in 1895 John, his brother Hilary and his mother Mabel Tolkien moved into a cottage in Sarehole, a village four miles from the centre of Birmingham. The green woods and fields of his new home had a huge affect on a Tolkien who had only ever known the hot and dry conditions of South Africa. Indeed Tolkien modelled his descriptions of The Shire on his memories of Sarehole. Sarehole Mill is quite possibly the Old Mill of Hobbiton.[2]

Tolkien joined King Edward's School in September 1900. Over the next few years the family moved several times: first to Moseley in 1900; then to Westfield Road, King's Heath in March 1901; and finally to Oliver Road, Edgbaston in 1902. Following Mabel's conversion to Catholicism her family withdrew financial support prompting her to pull Tolkien out of King Edward's School. He and his brother were enrolled in the Oratory School, St Philips. Tolkien returned to King Edward's School in 1903 after winning a scholarship from the school. Before Mabel died in 1904 from diabetes, she appointed Father Francis Xavier Morgan to be John and Hilary's guardian.[2]

In September 1933 Tolkien visited his childhood sceneries in Sarehole, and was disappointed that it had "been exposed to such violent and peculiarly hideous change"; Hall Green had become a suburb, new buildings with red brick surrounded their old cottage, a bluebell lane traversed by motors, the miller's house converted to a petrol station, and many trees gone.[3]