Tram Nybol[note 1] was a grey, arched bridge crossing the rivers Afros and Gruir at their confluence near the House of the Hundred Chimneys in Tavrobel, according to the early version of the legendarium in The Book of Lost Tales.[1][2] 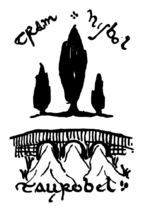 After the disastrous Battle of the Heath of the Sky-roof during the Faring Forth, the Elves and, according to one outline, Eriol, crossed Afros and Gruir in an attempt to escape the invading Men, presumably at Tram Nybol.[3]

The name Tram Nybol is in Gnomish. The first element of the name is tram ("bridge"), but the second element Nybol is unclear, possibly being an adjectival form of nib ("snowflake") - therefore, the name might mean "Snowy Bridge", although it is not obvious why such a name might be appropriate.[1]

Tram Nybol might have been inspired by the Essex Bridge, crossing the river Trent near the village of Great Haywood (which was the inspiration for Tavrobel).[1]