Aeglos was the name for the spear of High King of the Noldor Gil-galad which was greatly feared by the enemy. It was carried by the King to the War of the Last Alliance, until Gil-galad fell in combat against Sauron himself, on the slopes of Mount Doom S.A. 3431.[1][2] 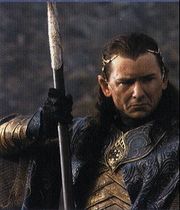 Gil-galad wields the spear during the Battle of Dagorlad. After Sauron's fall, Aeglos is discovered perched atop a pillar-like pinnacle in the Plateau of Gorgoroth, where it continues to emit a bright light. It is left as a beacon of hope to those who traverse the scorched plains of Mordor.