Eithel Ivrin, or Ivrin's Well was a fair pool in a stone basin carved by falling waters in the southern face of Dor-Lómin and beneath Ered Wethrin. The springs fed into the nearby Pools of Ivrin and the Falls of Ivrin, and these features were sometimes collectively referred to as Ivrin.[1]

The pools themselves were surrounded by a tree-clad hollow[2] and were the source of the River Narog, which flowed from Ivrin some eighty leagues before it joined the River Sirion.[1]

The springs marked the corner of the lands ruled by Turgon before he removed to Gondolin, which extended westward from this point.[1]

Suggested by Gwindor to be a place blessed by Ulmo in ancient days and guarded them from defilement. Ivrin was also known as a place of healing, and for the endless laughter of its falling waters.[3]

After the rising of the Sun and the return of the Noldor to Middle-earth, King Fingolfin held the Mereth Aderthad, the Feast of Reuniting, in the green and fair lands around the spring in F.A. 20.[4] And Finduilas, daughter of King Orodreth, was called by Gwindor who loved her Faelivrin, which is the gleam of the sun on the pools of Ivrin.[3] 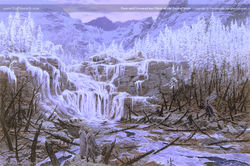 When Finrod Felagund and Beren set out from Nargothrond, they journeyed north beside Narog to its source in the Falls of Ivrin before continuing on to Tol Sirion.[5]

After the death of his friend Beleg, Túrin walked without purpose, but Gwindor brought him there and after drinking the waters of Ivrin, his tears were unloosed at last and he was healed of his madness and grief. It was beside the pools of Ivrin that he made the song Laer Cú Beleg before he and Gwindor followed the Narog south to Nargothrond.[6][3]

Years later, when Morgoth released the dragon Glaurung into Beleriand, Glaurung defiled Eithel Ivrin,[3] uprooting the trees and breaking the stone basin so that the waters strayed and the land became a barren marsh and a welter of frozen mire.[7][8]

After the overthrow of Nargothrond, Túrin was bewitched by Glaurung and he travelled north to Dor-lómin seeking his mother and sister. He came with the first ice of winter to the pools of Ivrin but it was frozen and he was unable to drink and be healed by the waters a second time.[3][9]

It was at this time that Tuor and Túrin cross paths for the first and only time, for Tuor and Voronwë passed by the defiled pools of Ivrin on their way to Gondolin. But neither cousin spoke and Túrin did not see Tuor, and Tuor did not recognize his kinsman.[7][2]