"Far, far below the deepest delving of the Dwarves, the world is gnawed by nameless things. Even Sauron knows them not. They are older than he. Now I have walked there, but I will bring no report to darken the light of day."
― Gandalf[1] 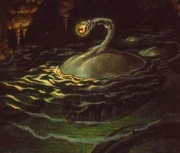 Nameless Things were creatures that are said to have dwelled in the depths of Arda (though they are only known to have lived under the Misty Mountains). They tunnelled deeper than any dwarf would ever go.[1]

They were described by Gandalf as very ancient, but their actual origin is unknown. Their nature or appearance are a mystery, but since they are as old as the world, they must have been a part of the Ainulindalë[2] or (since Sauron knew them not), a by-product of it.

Some of such things, preferring darkness, have sneaked in the Elder Days into caves under Mountains, being their ancient inhabitants. Even when the Orcs of the Misty Mountains dug around Goblin-town, such slimy creatures withdrew to the darkest nitches, and lurked beyond their knowledge.[3]

The Balrog known as Durin's Bane learned their tunnels while living in the depths of Moria. After Gandalf fell with him in the abyss, Durin's Bane seemed to know his way up and found the Endless Stair. He was Gandalf's only hope and he followed him.[1]

Nameless is a creature type categorized as "Ancient Evil". They have a variety of shapes, but most of them are humanoid, only with no eyes or no head at all. The Watcher in the Water is classified as Nameless, as is "Helchgam", another tentacled creature found in the sewers of Carn Dûm.

Retrieved from "http://tolkiengateway.net/wiki/Nameless_Things"
Categories: Other races | Characters in The Lord of the Rings