Werewolves were servants of Sauron, fell beasts (wolves) inhabited by dreadful spirits that Sauron had imprisoned in their bodies. [1]

Werewolves were created (or a least corrupted from some other form) by Sauron, who was their master, and who took the shape of a great wolf himself at least once.[1]

The first werewolf was Draugluin, and the greatest was Carcharoth, the guardian of Angband, a descendant of Draugluin as all other werewolves were.

In the Grey Annals it is told that "creatures that walked in wolf-shapes" entered Beleriand in the Valian Year 1330.[2]

Although not appearing as such in the known written records of Arda during the Second and Third Ages, Gandalf mentioned the werewolves as being among Sauron's servants in the late Third Age, along with orcs, trolls, wargs, and wraiths.[3] 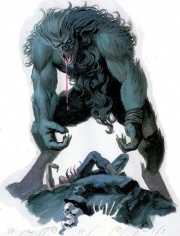 Classified as Undead Beings, the Werewolves are either bred from Wolves or Wargs. They cannot transform themselves into Men, although they can alter shape into being able to stand upright (while remaining Wolf-like).[8]

Werewolves can change between Man-form (hairy, muscular folk) and Warg-form (surpassing the size and ferocity of the largest Wargs).[9]