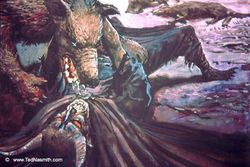 Wolf-Sauron was the name given to the dreadful wolf-shape that Sauron took when he went from Tol-in-Gaurhoth ("Isle of Werewolves") to do battle with Huan, the Hound of Valinor.

According to prophecy, Huan would not die until he had encountered the greatest of all wolves, so Sauron contrived to take on that role and defeat the hound. He failed, as the greatest of all wolves was not Wolf-Sauron, but Carcharoth of Angband, and through Lúthien's magic and Huan's valour Sauron was defeated. Surrendering his tower on Tol-in-Gaurhoth, he fled in the form of a vampire into the woods of Dorthonion, and was not seen again until after the War of Wrath.[1]