Bergil was a boy of Minas Tirith.

Bergil was born around T.A. 3009 and was the eldest son of Beregond of Gondor. He had at least one younger brother, Borlas.

A boy at the time of the War of the Ring, he accompanied Pippin Took when he first arrived in the city of Minas Tirith. He led Pippin to the Great Gate of Minas Tirith to view the men from the various provinces of Gondor coming to Pelennor to reinforce the city against the impending siege.[1]

Bergil is Sindarin for "Valiant star". 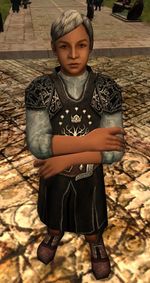 Bergil in The Lord of the Rings Online

The role of Bergil was played by a young David Hemmings.[2]

The voice of Bergil is provided by Viktor Petrov.

Bergil is first found is pre-battle Minas Tirith, where he and his friends take the player on a series of adventures throughout the city. After the Battle of Pelennor Fields, he and the player are help Ioreth in finding athelas.