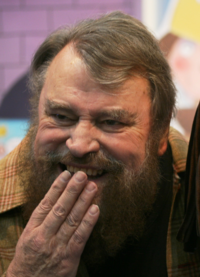 Brian Blessed (October 9, 1937) is a British actor. Blessed, notorious for his large red beard, played the similarly red-bearded Farmer Giles in the Tales from the Perilous Realm radio series.

Blessed broke through as Police Constable Smith in long-running police series Z-Cars, and after that, most of his roles were influenced by his imposing appearance and voice. He appeared in I, Claudius, served as a narrator at Jackanory, played King Richard IV in Blackadder, and many other iconic performances. It was initially rumoured that Blessed would be offered a role in The Hobbit film series,[1] but this later proved to be unfounded.