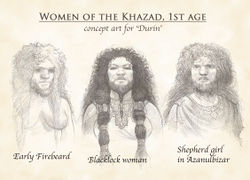 Dwarves wanted their women to be protected from other races and they usually kept them concealed inside their mountain halls. They seldom traveled in the outside world, only in great need, and when they did, they were dressed as men; with similar voice and appearance as male dwarves, even when they are rarely seen they are usually mistaken for a male.[1]

Gimli stated that only approximately one-third of their population consisted of women, which was the reason for the slow increase in population of the race. Moreover, while Dwarf-men outnumbered Dwarf-women two to one, less than half of Dwarf-men actually married: many preferred to spend their time with their crafts instead. Meanwhile, many Dwarf-women never took a husband either: some desire none, or desired one who could not or would not marry them, in which case they would have no other.[1]

Misconceptions among other races

Because of the scarcity of Dwarf-women, their secrecy and similarity in appearance to males, and their lack of mention, many Men failed to recognize their existence. They believed that the Dwarves' population was only of men, and a legend said therefore that they were 'born' by growing out of stone.[1]

In The War of the Jewels, all Dwarves are described as having beards, including women.[3] In later writings published in The Nature of Middle-earth, Tolkien did not discuss female Dwarves when listing the characters he imagined with or without beards, simply mentioning that all male Dwarves had beards.[4] 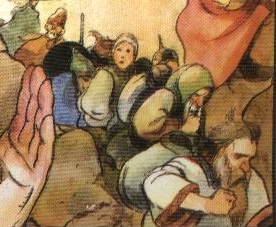