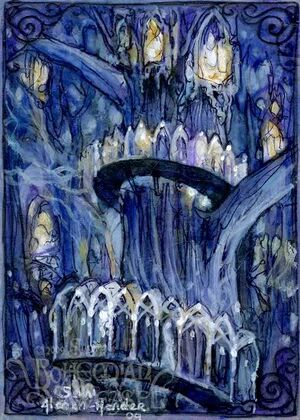 Telain (Sindarin, plural of Talan[1]), known in Westron as flets, were platforms built in the trees by the Galadhrim Elves of Lothlórien.

Telain were built high up Mallorn trees, created in the space where the trunk of the tree divided into many branches; they lacked walls, or even rails, but portable screens were put to keep out the wind; they were only accessible via a lowered hithlain rope-ladder. They were mainly used as guard-posts and watch-towers around the edges of Lothlórien.[2]

In Caras Galadhon, however, telain were more common and served more of a ceremonial function: it was on a house built on a talan that the Fellowship met with Galadriel and Celeborn.[3]

Telain were retained in the film, although there were no moveable plaited screens or rope-ladders visible. In The Lord of the Rings the meeting with Galadriel and Celeborn took place inside a large hall built on a talan,[3] whereas in the film it took place on an open talan.

Flet is an archaic English word referring to the floor of a house or a flat.