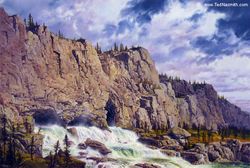 The Gates of Sirion by Ted Nasmith

The Gates of Sirion was the cavernous mouth in the southern hills of the Andram where the River Sirion emerged from its underground course.[1] The Gates were located three leagues southward of the Falls of Sirion where the river plunged below the Andram south of the Aelin-uial.[2]

In the early Book of Lost Tales, they were known as the great cave of Tumultuous Winds, which the Exiles of Gondolin crossed in their wanderings.[3]