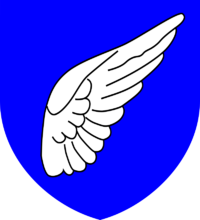 Emblem of the house of the Wing. Art by Rondador

The house of Swan is an isolated concept in the early version of the legendarium in The Book of Lost Tales.

Tuor refered to himself as belonging to "the house of the Swan of the sons of the Men of the North".[1]:160 It may be supposed that Peleg and Indor (Tuor's father and grandfather respectively in this stage of the legendarium) also belonged to this house; or, more probably, Tuor may have invented it for himself, as he had personally chosen the Swan as emblem.[1]:151 Later, the house Tuor founds in Gondolin is called the "house of the Wing" and its emblem was the wing of a "swan or gull".[1]:172

In a prose fragment following the Lost Tales, Tolkien changed the name and explored the concept more deeply: after the Battle of Unnumbered Tears, a great part of the kindreds of Men dwelt in Dor-lómin about the waters of the lake Mithrim, and they were friends of both the Gnomes and the Dark Elves. They were called Tunglin (Noldorin for "folk of the Harp"), as their joy was in the wild music.[2]

In the later legendarium, the motif of the swan remained: in Of Tuor and his Coming to Gondolin is said that the swan was the token of Tuor's foster-father Annael and his folk, who were indeed "men of the North", dwelling in Mithrim.[3][1]:205