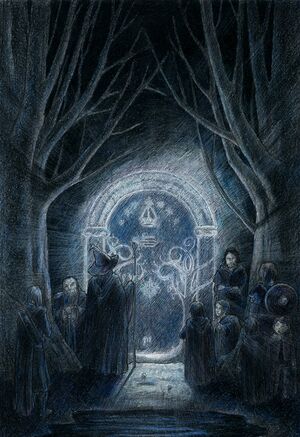 Ithildin was a substance made by the Elves out of the metal mithril and used by the Gwaith-i-Mírdain in constructions such as gateways. Ithildin could only be seen by the reflected light of the Moon and stars, and even then remained hidden until a "magic" word was said. The designs on the Doors of Durin were made from this substance.[1]

Tolkien stated that ithildin is a Sindarin name, meaning "moon-star(light"), "moonlight" or "starlight". The word contains the elements Ithil ("moon") + tin/tîn ("spark; star; twinkle of stars"). He noted that the correct Sindarin form should be ithildim.[2]