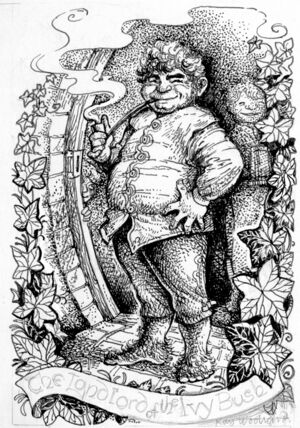 The Landlord of the Ivy Bush (unfinished) by Kay Woollard

"No one had a more attentive audience than old Ham Gamgee, commonly known as the Gaffer. He held forth at the The Ivy Bush, a small inn on the Bywater road..."
― The Fellowship of the Ring, "A Long-expected Party"

The Ivy Bush was an inn located on Bywater Road in the Shire.

The Ivy Bush was frequented by the Hobbits of Hobbiton and Bywater. Prior to Bilbo's Farewell Party, many people gathered around Gaffer Gamgee, were interested in the stories he told about Bilbo and Frodo Baggins. Daddy Twofoot, Old Noakes, the miller Sandyman and others, such as a stranger from Michel Delving gossipped about the mysterious Bagginses and the rumored treasure in Bag End.[1]

The Ivy Bush is the name of a public house located on Hagley Road, Birmingham, England.[2] When Tolkien lived on Stirling Road this would have been his local hostelry and could be found halfway between his house and the Birmingham Oratory, where he worshiped for a time. 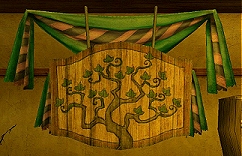 The sign of the Ivy Bush, as depicted in The Lord of the Rings Online

The Ivy Bush is a two-story building located at Bywater's market. Unlike the Green Dragon, which is on the other side of the market, the Ivy Bush plays no part in the story.