Considering its length, Náin more than likely fought in much of the War of the Dwarves and Orcs, however his only deeds are recorded at the Battle of Azanulbizar.

In the battle, Náin led fresh reinforcements to the Dimrill Dale where he fought his way all the way up to the steps of the East-gate of Moria, where he dueled with Azog. But Náin was half blind with rage and fatigued from battle, so he swung with all his might at the Orc. Azog darted aside and kicked Náin's leg so that he missed and shattered his mattock on the steps. Náin stumbled and Azog tried to hew his neck, but the Dwarf's mail withstood the edge. Yet, the blow was so powerful that Náin's neck was broken and he fell.

After the battle his body was burned, along with the rest of the dead on wooden pyres. After his death the lines of Grór's two elder brothers failed, and Náin's son Dáin II Ironfoot became King.[1] 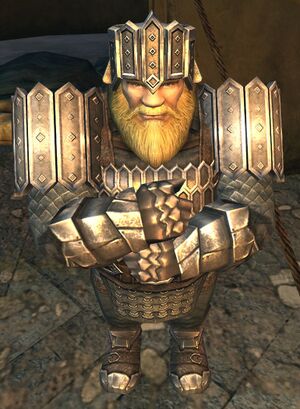