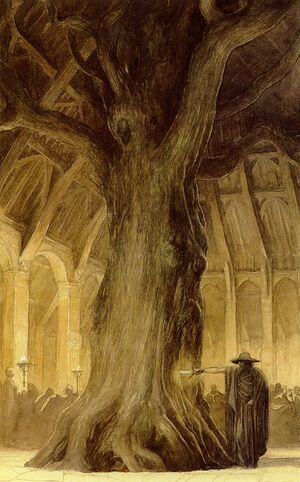 Norse mythology refers to the collection of the sagas and legends of Scandinavia. Most of it is found in the Poetic and the Prose Edda. J.R.R. Tolkien borrowed many Norse concepts and storylines for his own legendarium, like the Shieldmaiden and the race of Dwarves. The names of many of Tolkien's Dwarves, as well as that of Gandalf, are taken from the Völuspá.

Elves also appear in the Norse sagas. Tolkien's Elves have the human-like stature and beautiful appearance of the Norse elves, rather than the miniature fairy-like size of elves in later folklore. He also borrowed the concept of Light Elves and Dark Elves from the Norse. However, in Middle-earth this does not refer to morality or appearance but to whether an Elf has seen the holy light of Valinor and the Two Trees.

Other creatures in the legendarium are also derived from Norse myths. Trolls frequently appear in Scandinavian legends, originally as a negative synonym for the Jotuns (giants) and later as a distinct creature. Tolkien derived the Wargs from the Old Norse word vargr and its Old English equivalent wearg, a word meaning both "wolf" and "strangler, choker". The giant wolves of Norse mythology, such as Fenrir, were referred to as vargr. Additionally, Tolkien's Barrow-wights take inspiration from the draugar of Norse mythology, undead creatures that lurk in tombs and barrows guarding treasure.

Outside the legendarium, Tolkien attempted to write his own versions of Scandinavian sagas such as The Story of Kullervo and The Legend of Sigurd and Gudrun. The influence and themes of these stories can be seen in Tolkien's tales of ill-fated heroes such as Túrin and in the conflicts of his heroes against cunning and powerful Dragons.