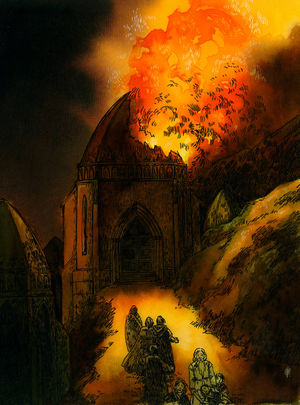 Rath Dínen was the street through the Hallows of Minas Tirith, where the great of Gondor, Kings and Stewards alike, were laid after death. It was accessed through the gate of Fen Hollen in the rear wall of the sixth level of the city.[1]

The Street was lined with images of those who lay there. The Stewards had a House apart from the tombs of the Kings, the House of the Stewards, where Denethor perished in T.A. 3019.[2]

When the seedling of the White Tree was found on the slopes of Mindolluin by Gandalf, the Dead Tree that had stood in the courts of Minas Tirith was laid in Rath Dínen.[3]

After Meriadoc Brandybuck and Peregrin Took died of old age in Gondor they were laid to rest in Rath Dínen.[4]

In Fo.A. 120[4] when King Elessar felt the oncoming of death he went to Rath Dínen and laid himself down in the House of the Kings. It was there that he bade farewell to Arwen.[5]