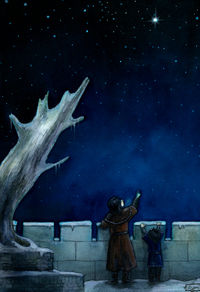 Brothers and the White Tree of Gondor by Lída Holubová

The Dead Tree (T.A. 1640 - 2872; the snag stood for 147 years) was planted by King Tarondor. It was the third and last White Tree of Gondor. It died at the same time as Belecthor II the twenty-first Ruling Steward.[1]

For lack of a seedling, the Dead Tree was left standing in the Court of the Fountain of Minas Tirith "until the King comes".[2] It stood throughout the following centuries and the War of the Ring. That was until King Aragorn Elessar found a new seedling on Mount Mindolluin in 3019.

When it was replaced, it was removed from the court but was placed in the Tombs of the Kings with all the honour that would normally be accorded a fallen monarch.[3]

The film shows the dead tree standing in the court. A close up reveals that it is flowering again during the Siege of Gondor, specifically the scene where Denethor is preparing to cremate himself and Faramir. During the coronation of Aragorn, the tree is seen fully blossomed.