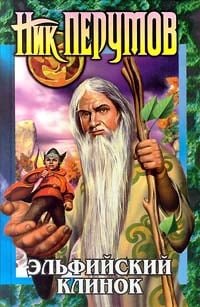 Ring of Darkness ("Кольцо Тьмы") is a Russian-language fantasy series set in Middle-earth 300 years after the War of the Ring, written by Nick Perumov.[1] It consists of three novels:

From the author's web site[edit]

Having written the last lines of "The Lord of the Rings", J.R.R. Tolkien has closed the door to the world of elves, dwarves, goblins, hobbits and men which he has created, and threw away the magical key to it. And only one author, Nick Perumov, was able to find the missing link to the mysterious and fragile world of the Middle-Earth. The job proved to be difficult as with each step the road kept getting steeper, each incorrect word could have ruined the magic of Tolkien. But talent has prevailed. J.R.R.T.'s world has come alive, has changed, has aquired new voice and depth and...has transformed into Perumov's world. And what Perumov thought of as a loose continuation of "The Lord of the Rings" has transformed into the vivid, magnificent epic trilogy, one of the most recognizable in the Russian and world science fiction genre.