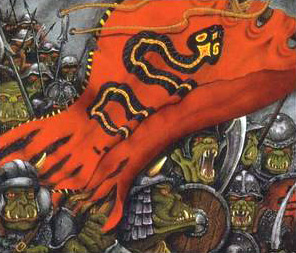 Serpents was a name used both for the dragons (properly, great serpents)[1] and as a synonym for ordinary snakes.

During his fight with Huan, Sauron took the form of a serpent.[source?] The "Black Serpent" on scarlet was also the heraldic symbol of a chieftain of the Haradrim, suggesting that there were serpents in the South.[2]

The Noldorin name Lhamthanc ("forked tongue") is said to be a "serpent-name", consisting of lham(b) + thanc.[4]

"Sea Serpent" is a creature of Drake-kind, able to inflict two strikes.