The Spring of Arda was a period of peace and flourishing that started when the First War between the Valar ended.

When the Enemy fled and Arda was completed, in the 1,900th Valian Year the Valar raised the Two Lamps: Illuin and Ormal. Arda became filled with trees and herbs, beast and birds, and all the lands were green. In the midmost of Arda was the Isle of Almaren in the Great Lake where, due to the blending of the light of the Two Lamps, all things were richest in growth and fairest in hue, and there the Valar made their abode and rested.[1]:52 Yet Melkor lurked beyond the Walls of Night. 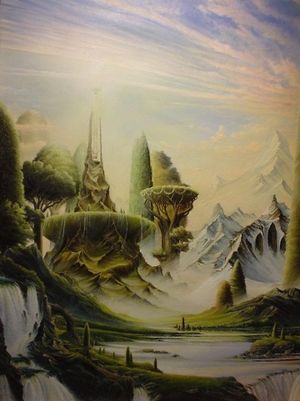 "The Elder Days" by Billy Mosig

Manwë ordained a great feast in the 3,400th Valian Year at which Tulkas wed Nessa.

After the feast Tulkas slept, and Melkor, seeing his chance, passed into the north of Middle-earth, raised the Iron Mountains, and began the delving of his vast fortress Utumno from which things were perverted and blighted.

In the 3,450th Valian Year Melkor came forth in war and threw down the Lamps of the Valar, breaking the lands, roiling the seas, and ending the Spring of Arda.[1]:53 In their efforts to stay the raging storm and preserve what they may of their creations, the Valar were unable to chase and defeat Melkor, who retreated to Utumno.

The Spring of Arda was marred as living things became sick, or rotted, or corrupted into monstrous forms. The destruction of the Lamps brought relative darkness to Middle-earth for several centuries, a period known as the Sleep of Yavanna. After witnessing the destruction that their powers might cause, the Valar were ever after cautious, fearing for the safety of the Children of Ilúvatar, who hadn't yet entered Arda.[2]