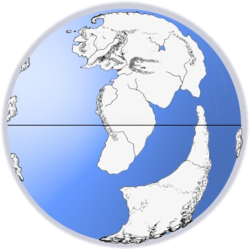 The Round World version is one of the variants of J.R.R. Tolkien's legendarium, published in the final volumes of The History of Middle-earth. In this version, the setting of his legendarium is more realistic and less mythological: the Earth was always round, and Arda was the name for the whole solar system instead of just the Earth.

In the Round World version the Sun and the Moon were not the fruit of the Two Trees, but actually preceded their creation, and the Two Lamps which preceded them all in the Flat World cosmology had never truly existed and were instead a subject of Númenórean legend. The significance of the Trees and the Silmarils was that they preserved the light of the Sun before it was tainted by Melkor when he ravished Arien. The Moon in this tale was instead a remnant of the First War from a time when Melkor sought to destroy all the earth but could not succeed in his attempts, and the Moon is what broke away from Arda in the destruction. However, another tale from this cosmology tells that the Valar wrought the Moon out of the earth to counteract the night when Melkor was most active.

Similarly, the stars were not created with the Awakening of the Elves, but the occluding clouds were removed to reveal them, and it wasn't Varda who kindled them, since her power was limited to Arda while the stars were set in Eä.

Tolkien first experimented writing a round world version of the Ainulindalë and The Fall of Númenor, in a time before the writing of The Return of the King. In that draft of the Ainulindale, the Sun already exists. Having sent both the "Flat World" and the "Round World" versions to Katherine Ferrar in 1948, she replied that she preferred the old version better because "The hope of Heaven is the only thing which makes modern astronomy tolerable: otherwise there must be an East and a West and Walls: aims and choices and not an endless circle of wandering". Christopher Tolkien guesses that her commentary influenced his father to return to the flat-earth model, but he didn't totally abandon it.[1][2]

The Round World mythology emerged again in writings between 1958-1960, but it was never developed beyond the stage of drafting and Tolkien didn't continue the revisions. Thus the Flat World version was chosen by Christopher Tolkien for the published The Silmarillion.[3]

Beside this, references to the seas being first "bent" after the Fall of Númenor, to the "Sunless Years", and to the trolls of the Twilight, survived in The Lord of the Rings.[4][5][6][7] These may, however, be seen as allusions made by the characters and writers of the Red Book to the mythology those at the time of its writing would have been familiar with rather than dogmatic truths of the history of Arda.

Towards the end of his life, Tolkien gave an explanation which affirmed the 'actual' truth of the Round World version without needing to rewrite the tales to reflect this underlying reality. He recharacterized the tales of the Quenta Silmarillion as legends, chiefly those of Men but blended with those of the Sindar, rather than as the bona fide histories of Arda. As such the tales could contain a germ of truth, embellished in literary tradition, without the need to be "geologically or astronomically 'true.'"[8][9][10]